"How you begin a piece is everything.  It is in the first bar that you establish your art with the listener.  Some there are who arrive at their tempo and tone level only after some desultory bars have passed.  Such vacillation proves to be costly.  There remains more to recover than has been lost; like reestablishing a good name after a misdeed."

- Notes on the Piano by Ernst Bacon, page 14


I hope you have a great Memorial Day weekend!  Enjoy!

Befriend Your Local Music Store, Grow Your Studio | Studio Helper Blog
Rachel points out the benefits of having a healthy relationship with your local music store.

Beginner Piano Lessons - Hearing the Music
Much of playing music has to do with being able to hear the music and express music.  Here are some ideas on how to convey this to your students. 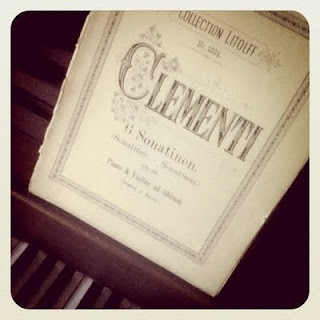 With the middle of May having come and gone, I have officially started my summer break.  While I still will continue teaching lessons this summer, my schedule is much slower - at least in relation to work! - and one of my goals is to spend more time practicing piano.

I recently moved and have been sorting through everything, which has also included my piano music.  As I was going through what I have, I came across a copy of Clementi's 6 Sonatinas for Piano (Op. 36) that belonged to my great-grandmother.  While the cover's a bit frail, the music is in good shape.  So, I've decided that I am going to work my way through these six sonatinas.  This is the first time I have tackled anything by Clementi, and I have to say that I'm enjoying his music so far.

How about you?  What are your music goals for the summer?

What I'm Reading This Week - May 20th


I hope this has been a good week for you.  Here in Minnesota the weather has finally turned beautiful, and I have been enjoying it tremendously.  Here are this week's finds.  Enjoy!

Studio Marketing: Advertising on the Internet | Color in My Piano
Joy lists some great advice and a bunch of free resources for advertising your studio on the internet.  Definitely worth a read!

Summer Teaching Ideas | The Teaching Studio
The school year is almost over.  What are your plans for this summer?  Here are some great ideas for your studio for the summer. 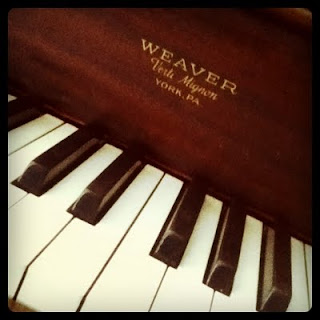 Recently, Joy at Color in My Piano hosted a Q&A session about favorite pianos.   Her questions and the responses that followed sparked my interest in finding out more about my own piano.  I currently own the piano that I practiced on as a kid.  When I moved out from my parents' place, they gave me the piano - since they no longer wanted it and since I'm the only one in the family that plays.  The piano had belonged to my grandparents and my great-grandparents.

On my piano are the words "Weaver, Verti Mignon, York, PA."  A quick Google search pulled up the following information from the Antique Piano Shop:
"The Weaver Piano & Organ Company was established in York, Pennsylvania in 1870. They built a full line of reed organs and chapel organs, slowly phasing out organs and increasing piano production as the turn-of-the-century approached. Weaver built several popular brand names including Livingston, York, Lincoln, and Davies & Sons. After the Great Depression era, Weaver built a line of spinet, console and baby grand pianos that remained popular for several decades. The Weaver Piano & Organ Company was out of business by the late 1950s. The extant Weaver instruments we have seen come through our restoration shop have been very well made pianos, indicating that Weaver built a higher grade of instrument."

The Verti Mignon is a spinet piano.  While it's not the fanciest piano, I love my piano for its family history and for all the memories of my piano learning experience.  I jokingly say that there are some pieces it should be able to play on its own, I practiced them so many times on it!

Email ThisBlogThis!Share to TwitterShare to FacebookShare to Pinterest
Labels: Piano

What I'm Reading This Week - May 13th

Planning a Piano Camp | The Teaching Studio
Looking for ideas for your piano studio this summer?  How about holding a piano camp?  Jenny gives some great ideas on how to plan one.

May 2011 Blog Roundup | Color in My Piano
Joy lists quite a few music-related blogs in this month's blog roundup.  Here are some great ones to add to your reading list.

Let's talk: What do you think?  I'd love to hear your ideas and thoughts!

"Music is full of secrets.  They may be shared by many, yet sparingly told."

- Notes on the Piano by Ernst Bacon, page 3

Email ThisBlogThis!Share to TwitterShare to FacebookShare to Pinterest
Labels: Philosophy of Music, Quotes

What I'm Reading This Week - May 6th

Happy first week of May!  I don't know about you, but I'm finding it hard to believe that April is already past and that we're now into May.  If only the weather here in Minnesota could catch up . . .

Kickstart Your Creativity by Writing 750 Words a Day | Lifehack.org
Here's a great idea on how to get those creative juices flowing.